Half a century of workingtogether 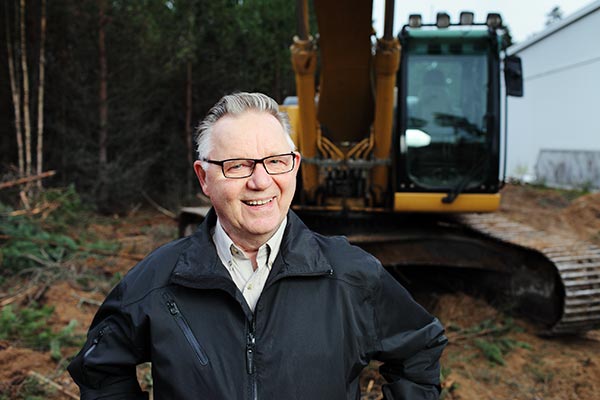 Bror Dahlbacka acquired his first digger on April Fools’ Day 1963. Whenever his new excavator required servicing, repair or spare parts, it made sense to turn to Häggblom’s workshop in the same village.

“We’ve worked a lot together along the way. To begin with, it was just small things, but Häggblom has been as true as steel from the very outset.”

Dahlbacka recalls with fondness cooperation from days gone by. Many things – from paying bills to rebuilds - were different then than now.

“In the 1960’s Alf Häggblom had a home office, a huge table near the door jamb in the large kitchen. Alf never just sent a bill to customer, he always rang first and asked “Would you have any money? I’ve got room.” Bills were paid in person in his home office. Alf wrote the bill at the table on an old typewriter and I then wrote out a cheque accordingly to pay it. If a customer hadn’t time to call at the office, Boris got on his cycle and delivered the bill.”

“Earlier, machines were “as if homemade”, they were easy to repair and service. We tried to improve any weak points noticed before they broke. If a machine broke down on site, that was that. Spare parts weren’t available like they are today and any broken part had to be repaired before work could continue. Earlier it was quite normal to weld booms that had given way during a strenuous job. That’s no longer the case.”

Dahlbacka commends Häggblom’s service for its flexibility. Help has always been at hand when needed and Häggblom has always responded to customer needs. Parts have been obtained and new ones made where needed.

“I explained and drew the kind of bucket we were looking for and Häggblom always provided us with one on that basis. Card stencils were long used as models for making buckets. Great leaps forward in Häggblom’s service provision have always stuck in partners’ minds.

“It was a big thing when Alf acquired a bigger lathe, the whole town went to see it. The lathe significantly expanded repair potential. Bushes, fittings, new pins were turned,” Dahlbacka recalls.

Bror Dahlbacka acquired his first digger at the age of just over 20.

“I had to begin doing something. We had a tractor and other machinery at home and so I was used to tinkering around with them. My first digger was just a bucket at the back of a familiar tractor. This long-timer civil engineer wistfully recalls the machines of yesteryear, even though new machines certainly have their good points.

“When the bucket sunk into the ground, smoke bellowed out of the exhaust pipe. You could see straight away that the machine was making an effort and that things were happening. These days, machines hum in the same way regardless of the work. It seems as if they’re a rubber band,” Dahlbacka laughs and looks at an old snapshot of himself on his digger, adding that...

“This photo was taken early in spring 1963. The machine didn’t have a cabin in those days. The machine was nothing to write home about, but at least it was better than a spade. Much has changed in 50 years 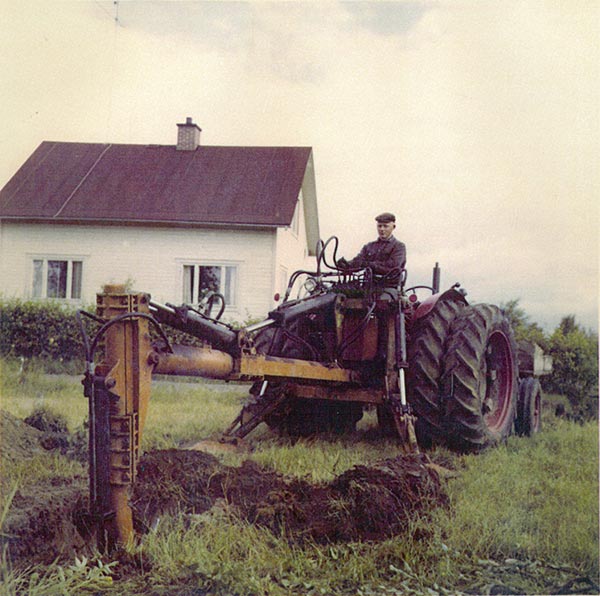