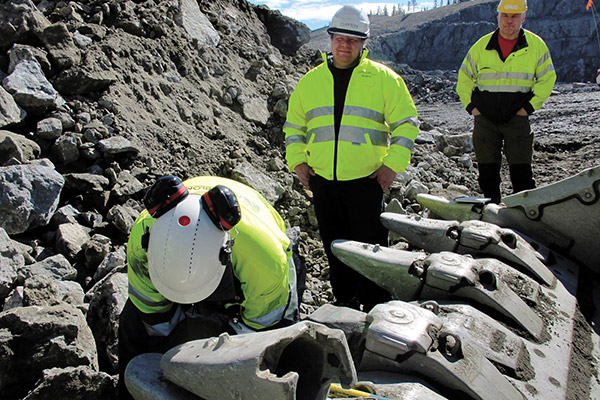 Trust is most important

Harsh winters in Swedish Lapland place tough demands on machinery. Then there’s also mining conditions and neither does summer bring any relief. Håkan Sturk and Anders Niemi at the Swedish company Cliffton are all too well aware of this. Their job is to keep the wheels rolling night and day, rain and shine.

The mining industry in Sweden goes back a long way. The village of Svappavaara in Kiiruna Municipality owes its existence to mining activities, which began in the mid-17th century. Neither has the main road through the village quietened through the centuries. The Svappavaara area is still one of the Swedish mining conglomerate LKAB’s most important sites.

Svappavaara is currently home to LKAB’s ore concentration plant, which produces iron-ore pellets for use as a feedstock in the steel industry. There is currently also one opencast mine in operation and two others under development in the area.

“As is known, mining operations are particularly sensitive to economic cycles and during the past winter iron prices on the global market sank very low. However, the future is looking really bright. There’s certain to be plenty of work in the future, too,” says Cliffton’s contracts manager Håkan Sturk, who is responsible for loading and transporting raw materials from the mines and concentration plant.

There’s certainly no shortage of work since Cliffton has around 80 of its own employees, 70 dumpers and loaders at LKAB’s site in Svappavaara. In addition, subcontractors have a similar number of people and mobile machines at the site.

“These are enormous, highly interesting projects that require a lot of resources, equipment and people,” Sturk says.

When acquiring equipment, Cliffton’s first priority is quality, price is the second or even third consideration.

“You need to be able to rely on the fleet, which has to be mobile 24/7 in all seasons. If the wheels stop rolling, it’s very expensive both for us and for the customer,” says service manager Anders Niemi.

Besides harrowing mining conditions, the caprices of the northern weather also impose their own challenges on the fleet. According to Niemi, who has worked for six years at Svappavaara, last winter was rather ordinary, with only a few days when it was too cold to operate any fleet at all.

Both Sturk and Niemi come from near the Finnish border and as well as speaking Swedish, both are also fluent in the local Torne Valley (Meänmaa) language. Personal relationships and trust are even more important in Lapland than further south in the country.

“You need to be able to trust people in the same way as machines. You can only lose the trust of a person in Lapland once,” Håkan Sturk says.

Niemi also says he highly appreciates smooth collaboration with the selling side.

“In Lapland, people call a spade a spade, without any euphemisms or beating about the bush. Mutual understanding is really important,” he adds.

Cliffton has acquired for Svappavaara several buckets designed and produced by Häggblom and the wear parts for track systems. The partnership has continued for three years and, according to Sturk and Niemi, everything has gone well.

“We have been especially pleased both with the equipment and the service received. Many of our subcontractors have bought a bucket from Häggblom,” Sturk says.